cancel confirm NSFW Votes: (0 votes)
Are you the publisher? Claim or contact us about this channel.
0
Showing article 11 of 48 in channel 14628406
Channel Details:
Viewing all articles
Browse latest Browse all 48
0
0
I posted earlier about the vulgarity of the uncivilized left and this seems to be a more prevalent theme than I had first considered. In yet another example, this time a recent protest took place on the University of Waterloo's campus.

Stephen Woodworth, a Canadian MP and invited guest speaker, was in the middle of delivering a lecture on  his legislative efforts on the study of the definition of a human being, when he was interrupted by a gang of protesters led by a walking, human vagina named Vulveeta. That's right! Some male university student felt the need to flex his muscle of free speech (and trample on another's) by dressing up as a vagina, giving his costume a name, and hurling obscenities.


Also included in the vulgar entourage was a female student carrying a placard which read "If you cut off my repro-choice, I will cut off yours," with a drawing of scissors. This threat of violence happened in front of the campus police who just stood there and acted like showpieces.

The campus police should have removed the hateful and violence-inciting protesters. This gang made violent threats, spewed hate, and trampled on another citizen's rights. Isn't threatening to mutilate another persons genitalia considered a threat of violence anymore? What about our infamous hate law- do the campus police feel these protesters should be exempt from it? Clearly they do because the police's action was not against the protesters, rather solely against the speaker when they asked Mr. Woodworth to leave "for his own safety". What a load of garbage! The campus police took the easy way out and chose not to do their job. They should have upheld campus safety and dealt with the hateful, violence-inciting protesters. The police should have asked the giant vagina to leave, not the civilized MP. If they couldn't handle the job, they should have called the real police. 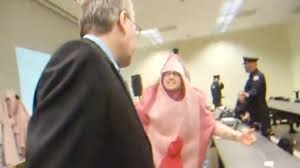 Based on my experience with protests, whenever the left comes out to rally, my vulgar-meter goes through the roof. What you hear and see are threats of violence, profane language, protesters wearing disgusting costumes, and/or little to no clothing. This protest had all of the above.

Given the incivility of this gang of students, the campus police and administration should have had the courage to do the right thing, and not allow freedom of speech to be boiled down to who shouts the loudest or is the most vulgar.

(PS: Where did this guy get such a costume? Did he make the thing specifically for this occasion? Or does one keep a six foot vagina costume on hand for such occasions?)
Viewing all articles
Browse latest Browse all 48
More Pages to Explore .....
© 2022 //www.rssing.com